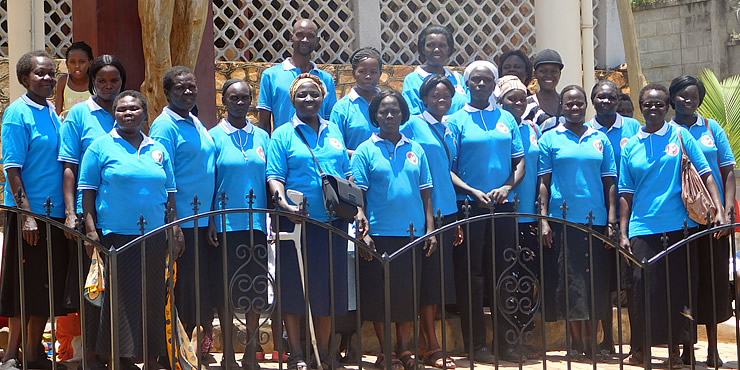 Mbuya Catholic Workers' Movement (CWM-Mbuya) is an Association which was formed by (8) members in April 1998 following the visit of Mr. Reiter and his wife from KAB Germany which is the equivalent of Catholic Workers’ Movement in Germany.

The main objectives of CWM-Mbuya were and still are;

CWM-Mbuya recognizes the fact that today we live in a world where;

Therefore, since the most effective route out of poverty is the promotion of decent work and support for adequate social protection, our mission has been to promote human work as the most essential key to the whole social question.

In addition to the above, as Christian workers our mission has been to further;

All in all, CWM Mbuya’s vision is to see a society free from social injustice by encouraging members to initiate and take collective action towards social change in respect to the welfare of all using the principles of the Catholic Church such as spirituality, promoting the voice of the voiceless and self-economic empowerment.

Since its inception, CWM-Mbuya which is mostly composed of the Women and Youth, has grown and expanded with the current membership standing at about (200). CWM-Mbuya is also tasked through its objectives to create a society that practices social justice at work, leadership in the church and the country, through the principles of the Catholic Workers' Movement i.e. See, Judge and Act.

Since its inception, CWM Mbuya has achieved the following;

These are at St. Kizito Primary and Secondary Schools in Bugolobi employing about Six (6) of our originally unemployed members who are currently earning a salary. The women members of CWM Mbuya benefit by supplying the said Canteens, products such as groundnuts, popcorns, pancakes, cassava chips, Soya etc. which they sell to the canteen and earn an income.

This employs majority of our members when we get big contracts. The Catering Unit serves at Weddings, Baptisms, Graduation parties and other functions by supplying food on contract basis. The Catering Unit generates funds for the movement and helps the ladies earn a living and be able to support their families.

CW-SLA (The Savings and Loan scheme)

This is a form of SACCO which is aimed at helping members who save their little earnings during the year, take out loans based on an approved business plan at an affordable interest rate without security, access an insurance Fund called the Social Fund during the year and finally be able to share them out with a profit at the beginning of the year in order to do something for themselves. During the year, the group can put a substantial amount of accumulated deposits at its disposal, into a fixed deposit in order to earn a reasonable interest rate. At the end of the day, the CW-SLA acts as a continuous enhancement of the basic entrepreneurship knowledge for the members.

Despite the above said achievements, CWM Mbuya still faces a lot of challenges which are hindering the Movement from steady progress and these challenges are as hereunder;

CWM Mbuya urgently plans to do the following in the near future in order to overcome its problems;

In conclusion, all we can say is that any other form of sponsorship or contribution from your esteemed Self and/or Organization towards our cause, shall go a very long way in helping the Movement achieve the above mentioned Twelve (12) objectives.